Working to maintain security during the 2016 Rio Olympics, police forces in Brazil are using a unique armoured vehicle made by Plasan, a leader in the design, development and integration of advanced armoured protection systems for all types of wheeled and tracked vehicles.

The 4×4 vehicle, known as the “Guarder,” can carry a payload of up to 3,500 kilograms in a spacious composite-steel hull with STANAG 3 armored protection. In Brazil, the Guarder is currently being used by the special weapons and tactics team (SWAT) of the police department of Sao Paolo. 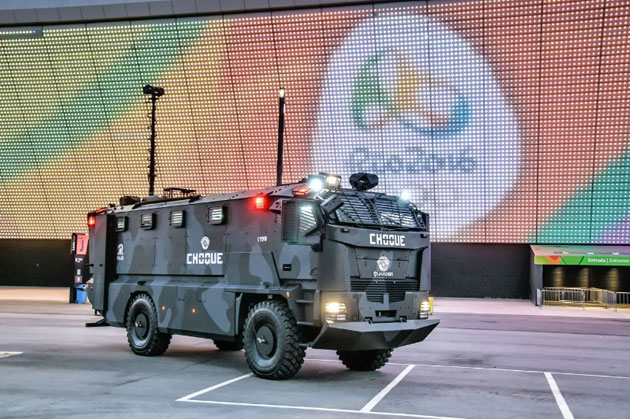 The vehicle makes it possible for a driver, commander and 22 fully-equipped troops to quickly and safely traverse any terrain. Sao Paolo police officers report that the vehicles are typically used for large-scale policing and rescue operations. It was mentioned that officers appreciate the ability of the vehicle’s strong cameras, which can capture optical and thermal images, which provide better information to the commanders.

Above all, the vehicle provides more security, both for the operators and for the public, who feel more secure in the presence of the huge vehicle.

Built on a MAN 4×4 chassis, the Guarder is the largest vehicle of its kind. However, the vehicle’s turning radius and maneuverability allow it to operate effectively on any terrain, including city streets, jungle, steep mountainous inclines, and even flooded
areas.

“We’re proud to see our vehicle used by police forces in Brazil as they work to keep the Rio Olympics safe and secure,” said Dani Ziv, CEO of Plasan. “From the beginning, we knew that the Guarder is the perfect armored vehicle for this mission. We’re all honored to be participating, in this way, in the Rio Olympics, helping to keep the peace at this amazing event.”

In addition to the security provided by its advanced armor protection, Guarder passengers are protected by an internal fire extinguishing system, as well as protection against chemical, biological and radioactive (CBR) threats.  The Guarder is even designed to withstand breakdowns in critical infrastructure, dirty bombs and chemical weapons
attacks.

The Guarder is also equipped with a retractable mast and electro-optic payload for long range day/night surveillance, in addition to its 360-degree thermal surveillance, navigation, communication, command & control, passive protection and non-lethal systems for riot control and dispersion.

The overall flexibility of the Guarder suits the needs of police, homeland security and first responders, not just in Brazil, but anywhere in the world. Guarder is a single vehicle that offers multi-mission capability to tackle the fight against terror, organized crime, riot control, fires, and even chemical, nuclear or biohazard disasters.

Plasan is a leading provider of mission-ready armored vehicle solutions. Over 30,000 Plasan-designed armored vehicles are in operational service with armed forces throughout the world in some of the most hostile combat areas. Plasan solutions are all developed by teams with real combat experience. Plasan says that it offers offers unparalleled expertise in add-on, integrated ballistic and smart armor components, hulls and kits; as well as advanced vehicle command, control and management systems.