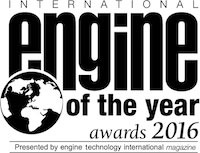 Ferrari was awarded the crown at the ceremony yesterday (Wednesday 1 June) at Engine Expo 2016 in Stuttgart. The awards are recognised as the industry’s top accolades for the world’s best powertrain technology, judged by a fully independent, international panel of 62 industry experts, including Padraic Deane, who has represented Ireland on the jury for the past twelve years.

The 3.9-litre bi-turbo V8 took four gongs overall, including the New Engine award, designed to mark the most important engine development in the last 12 months, the 3-litre to 4-litre category and the Performance Engineaward, which Ferrari has now claimed six years in a row. In what proved to be a memorable night for the Italian marque, its 6.3-litre V12, as found in the Ferrari F12 TDF(Tour De France) also clinched the title in the Above 4-litre category.

Ford again claimed the Sub 1-litre award for the 1.0 EcoBoost, bringing the engine’s total number of award wins to a phenomenal nine in five years. Tesla retained the Green Engine award for a third year with its full-electric powertrain found in the Model S and Model X, while Audi’s 2.5-litre five-cylinder turbo, found in the new RS3 and RS Q3, took the 2-litre to 2.5-litre title for a staggering seventh consecutive year.

Mercedes-AMG took the 1.8-litre to 2-litre award with the 2-litre turbo found in the A45, CLA45 and GLA45 models, in another repeat of last year’s results. And Porsche did not leave empty handed, clinching the 2.5-litre to 3-litre class for its new 3-litre six-cylinder turbo engine, found in the Porsche 911 Carrera.

Dean Slavnich, chairman of the International Engine of the Year Awards and editor-in-chief of a number of automotive titles, said, “It’s been another sublime year for powertrain development, with each category seeing an array of exceptional engines shortlisted. Huge congratulations to all the winners, especially to Ferrari for its phenomenal wins!”

An entire decade has passed since a V – or indeed anything more than six cylinders – has won the outright International Engine of the Year Award. Back then BMW’s all-conquering, naturally aspirated V10 in the M5 swept to victory. And that result turned out to be a peak for the awards, in terms of cylinder count and displacement at least.

Since then one common characteristic has linked all other winners: IC engine downsizing. Following the M5 heart’s victory, BMW’s own six-cylinder turbo won the outright award for a few years and then, in 2008, there was a momentous leap from 3 litres down to 1.4 litres when VW’s sophisticated TSI TwinCharger took the crown. Things got even smaller after that, with Fiat’s 875cc two-cylinder collecting the overall trophy in 2011 and then, for three solid years, it was Ford’s wonderful 1.0 triple that dominated. Last year the 1.5-litre three-cylinder hybrid powertrain from BMW in the i8 came to the fore, and while that’s 33% larger than Ford’s baby EcoBoost, it’s still a landmark downsized development insomuch that it powers a progressive performance application.

And so on to this year. At first glance it would seem the winning powertrain takes this downsizing trend and rips up the rulebook. After all, here’s a high-performance heart-pounding creation with a V8 design and 3,902cc displacement – and let’s not forget the small matter of 670ps at 8,000rpm and 760Nm torque at 3,000rpm!

Taking top spot for 2016, then, is Ferrari’s sublimely engineered 3.9 twin-turbo V8 in the all-new 488. By winning the outright award, as well as New Engine, Performance Engine and its category class, which, by the way, was probably the toughest subdivision of all this year, Maranello’s finest becomes one of only three powertrains to take four trophies in one year.

But don’t mistake the Ferrari V8 as some sort of IC dinosaur from yesteryear, somehow lucking out at the 2016 awards among designs that are seen as being planet-friendly. Code-named F154CB, this eight-cylinder is an absolute masterclass in powertrain engineering, and there’s much more to it than just its amazing power delivery, precise control and a wonderful Prancing Horse soundtrack.

While some aficionados were worried when it was confirmed the 458’s successor would swap an atmo heart for a turbo creation, the 488 V8 has proved to be a winner in every way, bringing together highly advanced technologies in one perfect package. Two IHI twin-scroll turbos help deliver the outstanding performance, but to eliminate lag Ferrari has paid special attention to the turbochargers’ compressor wheels, and the sealing between the wheel and the turbine housing, ensuring power delivery is instant and linear.

The V8 also has an ion-sensing system, which measures ionising currents to control ignition timing and adaptively predict misfires, as well as a multispark function that enables the spark advance to be maximised at all revs. It’s technologies such as these that underscore the importance of the V8: these subsystems will trickle down to other FCA products, in turn raising the standard of powertrains around the world. The 488 heart is proof that performance cars – and all passenger cars – need not fear the downsizing trend. In fact, if all engines were this good, the industry’s future would be a forced-induction utopia.

The International Engine of the Year Awards are presented by Engine Technology International magazine, published by UKIP Media & Events Ltd. The Awards involve the voluntary participation of 62 motoring journalists from 31 countries including Padraic Deane of Automotive Publications, who represents Ireland on the prestigious international jury. UKIP Media & Events Ltd receives no advertising or financial support from any car manufacturer or distributor.

International Engine of the Year 2016