Launched in 1968, the legendary Hilux has been a dominant presence in the pick-up market for nearly 50 years, recording global sales of over 16 million units. The new Hilux, whose name represents the combination of the words “High” and “Luxury”, builds on its legendary reputation.

Since it was launched in Ireland, over 5,000 Hilux have been sold with many of them still on Irish roads today.  The current generation was launched in 2005 and enjoyed a refresh in 2011. Since 2011, the Hilux has enjoyed a No. 1 best-selling performance in its segment every year. That No.1 performance continues in 2016, with an exceptional 27 per cent segment share. The new Hilux arrives in Irish showrooms in time for 162 registrations.

The new Hilux driving performance is much improved courtesy of an all-new 2.4 D-4D engine. Despite its smaller size, compared to outgoing 3.0L, the new torque figure is 16.5 per cent higher at 400Nm & this higher torque figure is available at a lower engine speed than before giving greater flexibility. Downsizing, with greater driveability and greater efficiency has been achieved, with new Hilux combined fuel consumption improving from 7.7L to 7.0L.

The improved driving performance is complimented by an enhanced cabin area. The seat hip point is 10mm higher than before for better visibility and now comes with telescopic steering adjustment to ensure the optimum driving position & maximum comfort. The introduction of a full 220v plug type charge point gives the benefit of being able to charge a laptop on the go.

The new Hilux provides a best in class performance in terms of Noise, Vibration and Harshness. There is better dash silencing, improved engine noise, better engine compartment sound insulation, thicker carpet for the cabin, wider weather-strips for the door openings as well as foam insulation in the roof area.

The new comfortable and quiet cabin also comes with a much more SUV like level of sensory quality, fit and finish. The Toyota Touch multimedia platform comes with a larger 7” screen and a 4.2” Colour TFT information screen within the dash display.

In terms of off road ability, there are a host of improvements. A benefit of the new 6 speed gearbox is a lower first gear which provides more power from start off and also reduces the risk of stalling at low speeds.

Off road performance is also enhanced due to an increase in ride height and improved axle articulation which is 20 per cent better than before. The new Hilux also has a 20 per cent improvement in structural rigidity, making it tougher than ever.

Many features are designed on new Hilux specifically with improved off road performance in mind such as re-positioned electrical components, curved cross member edges and improved under-body protection. In conjunction with a new engine under cover and improved approach, ramp and departure angles, Hilux now has best in class off-road damage resistance.

A rear diff lock is standard on new Hilux, a critical off road feature that is lacking from several Hilux competitor vehicles.  AWD is now selectable via a dash located switch rather than a second gear lever. This makes the system much more user friendly whilst also making for a more passenger like cabin area.

Towing capacity is increased to a very competitive 3.2 tons on Double Cab models & 3.5 tons on Single Cab.  The Hilux can now tow 400Kg more than before. The Double cab has the widest and longest deck in the segment. 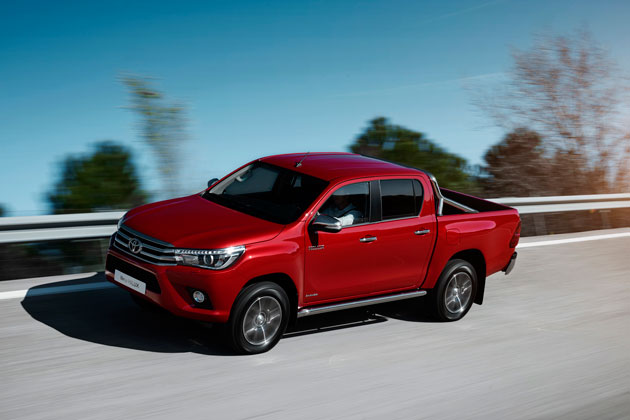