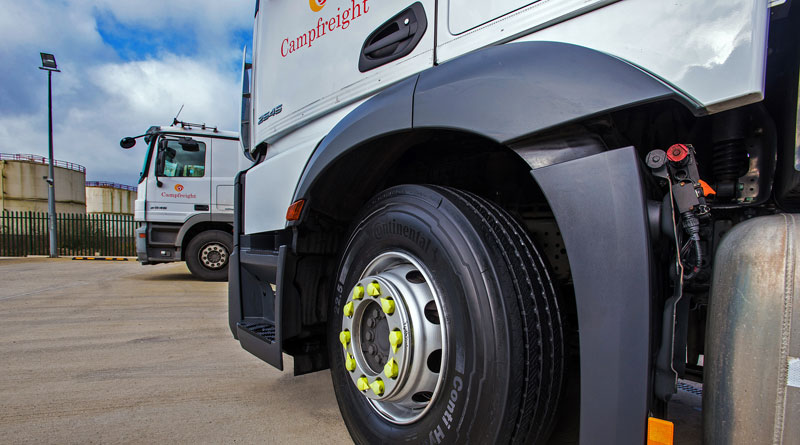 Managing director, George O’Leary, is satisfied to be able to report significant fuel improvements as well as outstanding mileage performance with the Continental tyres now fitted to the fleet’s drive and trailer axles – “Rolling resistance is just so much lower than other tyres we used in the past” – there is, he says, another key benefit from the Continental tyres. “My biggest saving is that I don’t get the blow-outs we used to have with the previous tyres fitted. The big issue outside of the cost for an early morning call out was if a tyre had a blow-out it could even take the mudguard and hose rail with it.

“So we needed tyres we could rely on to do the job and cut the risks of this sort of incident to the very minimum. I’m satisfied that these Continental tyres have been doing what we expect them to do since the first days of the initial trial and throughout each year since.

“The Continental tyres also wear extremely well,” he adds, “and that means we are seeing far fewer tyre changes, which again saves cost.”

At the moment, Campfreight runs Continental tyres on all drive (HD Hybrid) and trailer axles (HTR2). These are supplied through local dealers and fitted by another local company, and George O’Leary now has plans to complete the fleet’s set-up with steer axle tyres from Continental. “Continental keeps closely in touch with us because of the nature of our business,” he said, “and we are going to trial some of their Generation 3 steer axle tyres (Conti Hybrid HS3) shortly. I wasn’t too sure about it all four years ago, but now I am looking forward to the prospect of running entirely on Continental as we go forward.”

The business keeps its own supply of tyres on site to avoid any potential for delays when changes are needed, and having a single manufacturer’s products clearly makes both economic and practical sense. Indeed, so central is the tyre issue to safety and economy for the business, Campfreight has given full responsibility for the area to one of its board directors.

Edward Morrissey is the man who maintains and monitors all safety checks – carried out by the Campfreight driving team and the local dealer – and oversees all trials with Continental. Fittingly, he had the final word, saying, “You ignore tyre quality not only at your own peril – but that of every other road user. We now have a relationship with a manufacturer whose products we have grown to trust. Rolling that out gradually has shown great benefits to date, and we are looking forward to extending this in the near future.”