Having recently taken delivery of four new Mercedes-Benz Actros trucks in early 2016, Perennial Freight has ordered a further 15 new units to be delivered on a phased basis over the next 18 months. 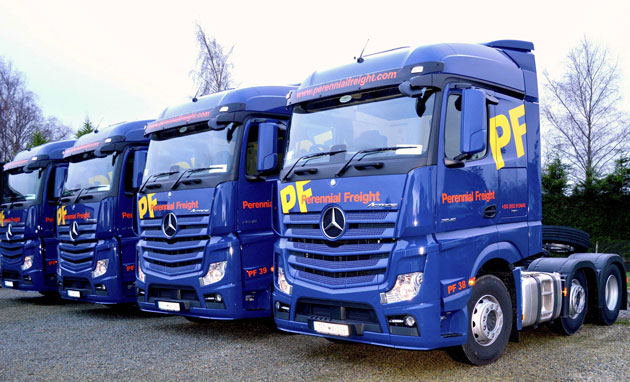 Once delivered, the new order will bring to in excess of 70, the number of Actros tractor units on the Company’s fleet.

Finished in Perennial’s distinctive cobalt blue livery, the trucks will be put to work at the company’s Taghmon base in Wexford, servicing daily routes across Ireland, the UK and mainland Europe.

Influenced in their choice by what Mercedes-Benz commercial vehicles sales manager, Fergus Conheady, said is ‘the excellent fuel efficiency and reliability of the existing Actros trucks on their fleet’, Perennial’s order follows recent Fuel Duel Challenge tests conducted by Mercedes-Benz which showed that on Irish roads and in Irish conditions, the Actros uses 10.4% less fuel than its main rivals.

Established in 1998 and now with offices in Ireland, the UK, France, Belgium, Holland and Poland, Perennial Freight is widely recognised as one of the largest transport companies in Ireland with a fleet of over 750 trailers and a further 130 trucks based across continental Europe operating transport services Europe wide including Turkey and Russia