Coinciding with the company’s 30th anniversary year, Slane-based Noone Transport has taken delivery of 20 new Mercedes-Benz Actros trucks – bringing to 28 the number of Actros units currently on its fleet. 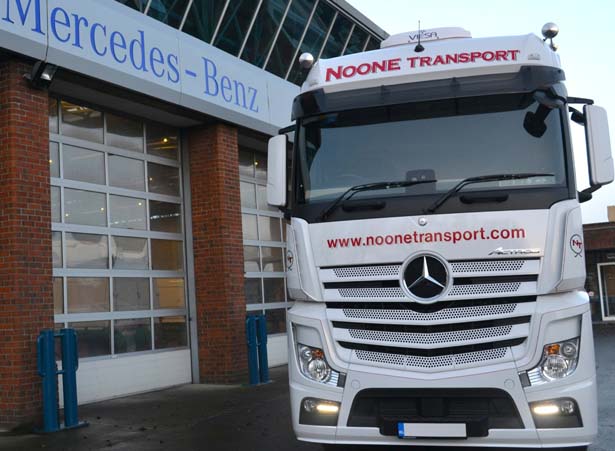 Fitted with night heaters, air-con, fridge, roof pods and Predictive Powertrain Control, all twenty of the new Actros are 1845LS BigSpace models finished in Noone Transport’s white and red livery.

Influenced in their choice by what Mercedes-Benz commercial vehicles sales manager, Fergus Conheady, said is ‘the excellent fuel efficiency and reliability of the eight existing Actros trucks on their fleet’.

Founded in 1986 in Duleek, Noone Transport has grown to become one of Ireland’s leading logistics and distribution companies. Operating from its Slane headquarters since 2001, the company operates a Europe-wide service for full and part-load consignments employing ambient and temperature controlled trailers.

Their order comes hot on the heels of recent Fuel Duel Challenge tests conducted by Mercedes-Benz which showed that on Irish roads and in Irish conditions, the Actros uses 10.4% less fuel than its main rivals.