Four of Ireland’s leading rugby stars have thrown their weight of support behind an unique 12-hour cycling event, in aid of the neonatal wards at the Rotunda and Midlands Regional Hospitals, which takes place on Saturday, September 5 at Rahugh, Co. Westmeath. 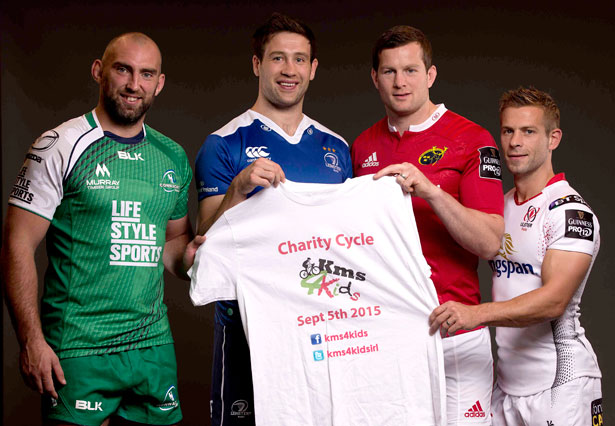 The event is the brainchild of the Auto Trade Journal’s Business Development Manager, Maurice Fitzgerald who is undertaking the 12-hour marathon cycle to raise funds for the two neonatal wards.

Maurice, whose sister Anita gave birth to premature quadruplet boys, in the Rotunda Hospital in February explains how the fundraiser came about.

“On February 28, last my younger sister Anita gave birth to premature quadruplet boys, at 29 weeks, in The Rotunda Hospital. After several weeks of intensive neonatal care they were moved closer to home to the Midlands Regional Hospital Mullingar.”
He added: “As a way of showing our gratitude for looking after Anita and the boys, we decided to give something back through a charity cycling fundraiser called ‘Kms4kids’, to benefit the neonatal wards of both hospitals.”
Kms4kids is a charity cycling event with a difference. It will run on Saturday, September 5 from 7am to 7pm in Rahugh, Co. Westmeath, on a 6km loop.

Participants are invited to join at a time that suits them, complete as many laps as they wish at a pace that suits them. This event is suitable for all fitness levels from National School children to teenagers, families and leisure cyclists right up to endurance athletes.

“I have being training for the past few months to attempt complete the full 12 hours. I invite anyone and everyone to join us on the day for what promises to be an enjoyable event for all. We have loads of stuff to give away including hotel breaks, bicycles, signed rugby jerseys and much more,” added.

Those who cannot make it can donate online through the MyCharity Page http://www.mycharity.ie/event/kms4kids_cycle_challenge/
If they include ‘raffle’ in the message section they are still in with a chance of winning some great prizes. There is a minimum donation €10 for inclusion in raffle.