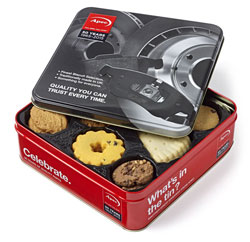 Apec braking is celebrating its 50th anniversary with a tasty giveaway – and you could be one of the 200 lucky winners.

Back in 1965 – the same year that Ford launched its iconic Transit – The Automotive Power Equipment Company set up shop in Bristol. Initially a motor parts wholesaler, the company soon specialised in brake components. Taking the initial letters of its name, it became Apec Braking. Now there are over 6,000 items in the range, covering 99% of all cars on UK and Irish roads.

You can join in the Apec celebrations by entering your details for one of 200 Apec anniversary biscuit tins, each containing a selection of fine biscuits.

In addition, the first 100 lucky garages will receive an assorted set of brake disc retaining screws, which will fit perfectly in your Apec tin.

To enter, go to www.cd-group.com/apec