A Birmingham company is celebrating a major milestone after it completed the 2500th sale of its innovative cooling system for the passenger vehicle industry.

Grayson Thermal Systems, which employs 245 people at its manufacturing and assembly plants in Birmingham, Poland and North America, has sold nearly £7m of its ‘E-Drive’ technology since it was first introduced. 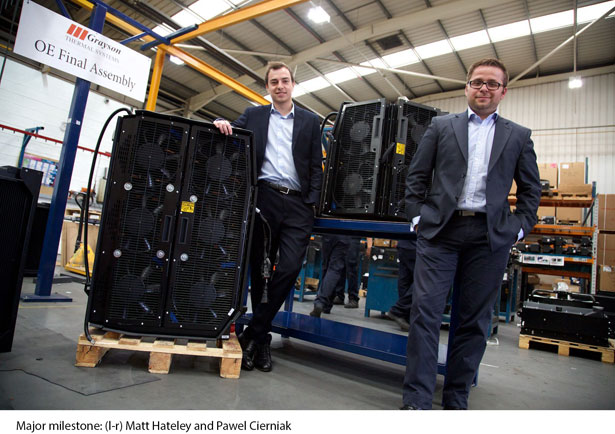 The electric fan system replaces the conventional hydraulic fan used to cool the engine used in buses and coaches and is proving a big hit with a global customer base looking for reduced operating costs, weight and noise on their vehicles.

Better still, real data from vehicle operators proves it can deliver a fuel saving of up to 10%, making it the most environmentally friendly cooling system in the marketplace.

“We have invested a lot of resource, time and money on the constant development of ‘E-Drive’ and it’s fantastic to see continued growth, with sales coming from the UK and across the world, including France, Poland, Netherlands, North America and New Zealand,” explained Matthew Hateley, Account Manager at Grayson Thermal Systems.

“The additional sales have contributed significantly to us taking turnover from £24m to £26m this year and 20 new jobs have been directly created as a result.”

He continued: “It’s not difficult to see why the new system is so popular. It covers the three main requests from our clients for outstanding performance, reduced fuel consumption and cost effective servicing and maintenance.

“It can be installed at original equipment production stage or retrospectively when vehicle operators are looking to replace components of their hydraulic system. We are now being specified by a host of global manufacturers as well as vehicle operators specifically requesting the Grayson system on all new fleet purchases.

“Retrofitting of our system is also available for all major European bus models, with each system bespoke to the chassis and engine to meet the original manufacturer’s demands”

‘E-Drive’ is fast replacing the hydraulic/viscous fan traditionally used in transit bus vehicles across the world.

The new system works by using a series of electric fans to provide localised coverage for air flowing over the radiator and charge air cooler.

The ‘E-Drive’ system only works when the engine reaches a certain temperature and returns it to its optimum level. This creates up to 10% reduction on fuel consumption, which saves the operator thousands of pounds every year.

Other benefits include easy troubleshooting feature and a ‘kerb side quiet’ operation that automatically dampens the fans as the vehicle slows to a halt.

Matthew continued: “We have used our new lightweight core technology to ensure it is substantially lighter than its conventional counterparts and ‘E-Drive’ can even be adapted to suit bespoke requirements up to 20 fans on specialist vehicle applications.

“With the correct annual servicing regime, it will outperform and live longer than rival systems available on the market.”

Established in 1978 by current Chairman Graham Hateley as a small car radiator repair business, Grayson Thermal Systems is now regarded as a world leader in the design, manufacture and supply of bespoke engine cooling, heating and air conditioning products.
It serves customers in more than 20 countries across the world through its factory in Birmingham and specialist service centre at Elmdon, just off the M42/M6 link.

International business units are already in place in North America and Poland, with further satellite operations due to be opened shortly.