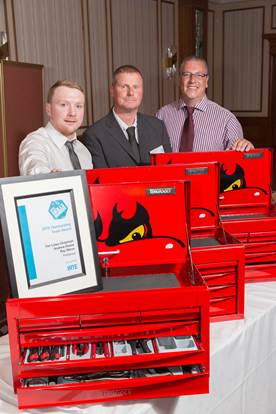 The champions of this year’s IRTE Skills Challenge have been announced at an awards ceremony held on July 16 at the National Motorcycle Museum in Solihull.

The IRTE Skills Challenge aims to find the best bus and coach technicians and apprentices in the UK and Ireland by testing their skills and knowledge in a series of mechanical, electrical and bodywork tasks. Since it was founded in 2011, this major event in the IRTE (Institute of Road Transport Engineers) calendar has been embraced by operators as a way of benchmarking the skills of their technicians, and celebrating excellence in engineering training and development.

Fifty technicians and apprentices battled it out in this year’s competition, which was held June 1-4 at S&B Automotive Academy in Bristol. Teams from Abellio, Arriva, FirstGroup, Go-Ahead London, Go South Coast, London United Buses, Metroline, Tower Transit, Translink, and trentbarton took part in this year’s event, which was sponsored by Allison Transmission, Bridgestone, Knorr-Bremse, Shell Lubricants, and Teng Tools, and supported by Abellio, DVSA and MAN.

The top prize – the IRTE Outstanding Team Award, given to the highest scoring team – was won by teammates Andrew Howie, Tim Laws-Chapman and Ray Silcox from FirstGroup. Prior to the competition, Andrew remarked: “I am looking forward to this new challenge and I believe it will be a good measure of where my fellow technicians and I are with regards to the rest of the industry.”

The Challenge this year also saw the introduction of a new award, the Philip Margrave Memorial Award for Outstanding Achievement, given to the individual who most embodies the spirit of the IRTE Skills Challenge – of engineering excellence, and commitment to their profession. Pamela Chapman, an apprentice mechanic from Arriva, was the first ever winner of this. Pamela also walked away with three other awards – The Top Scoring Electrical and Mechanical Award (with teammate Tom King), the Runner Up DVSA Inspection Apprentice Award, and the award for Top Scoring Mechanical Apprentice.

Lloyd Mason, engineering development manager for Arriva UK Bus, has lead winning contestants from Arriva since the event was founded in 2011. “The IRTE Skills challenge is now an established event in the bus and coach calendar, and encourages engineers to showcase their abilities and perform to the highest level,” he says.

The keynote speaker for the ceremony was Sir Moir Lockhead OBE, patron of the Society of Operations Engineers, the umbrella organisation of IRTE. Sir Moir spoke of his career, from his apprenticeship as a teenager to becoming chief executive of FirstGroup.

He remarked: “It has been an honour to see the commitment of operators, technicians and apprentices in this year’s competition – commitment that is vital to the success of the UK’s road transport industry. This event not only rewards those individuals who are committed to their profession, but also the operators who strive to ensure their people are trained to the highest standards. Through initiatives like this, IRTE aims to encourage safety, compliance and development in road transport.”

The 2015 event marked the second year that the competition had the support of the DVSA, who sponsored the DVSA Inspection Test part of the competition – a difficult inspection test created by the DVSA that closely replicates a PSV annual test.

The winners received prizes some generous prizes from Teng Tools, as well as a demonstration day out with the DVSA.

(left to right) Andrew Howie, Tim Laws-Chapman and Ray Silcox from FirstGroup walked away with the top prize of the competition