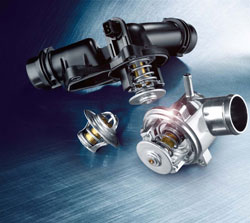 The complete range of Mahle Aftermarket thermostats extends to more than 500 individual part numbers, which represents a huge proportion of the UK and Ireland vehicle parc.

The range includes traditional thermostat inserts, housing thermostats (with the mixing chamber integral to the unit), Map-controlled thermostats, sleeve valve thermostats, oil thermostats and EGR thermostats that regulate the flow of coolant through the EGR cooler. In addition, Mahle Aftermarket also supplies a multitude of thermal switches and thermocouples.

When it comes to thermostats, two Map control and two insert – one of which is a heavy duty application – join the range. TM-21-97 caters for the 3.0-litre petrol engine used for BMW 5 and 6 Series, while TM-42-103 covers the same engine in the 6 Series and later versions of the 7 Series.

TX-113-88D caters for multiple applications in the Suzuki range, including Carry 1.3/Swift and Jimny 1.3/Vitara and Grand Vitara 1.6/Wagon R 1.3, as well as the 1.2-litre engine in the Chevrolet Aveo/Kalos.

For more information about the quality products available from Mahle Aftermarket, call the sales team on: 0845 688 5007 or visit: www.Mahle-aftermarket.com