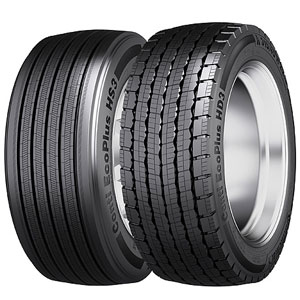 Following the market launch of the new 315/45 R 22.5 drive axle tyre Conti EcoPlus HD3 at the start of the year, Continental has now completed its tyre offering for low-liners with the new 355/50 R 22.5 steer axle tyre Conti EcoPlus HS3. Together these two low-profile tyres present a new concept for towing vehicles. They enable fleet operators to make optimum use of the maximum three-metre internal load height of their trailers without exceeding the maximum overall height of four metres permitted by law in most European countries.

In addition to their high load capacity, these two tyres from the Conti EcoPlus family are specially designed for long-distance use and regional transportation with frequent use of motorway and offer maximum service life with high fuel efficiency.

With their low diameters, these two low-profile tyres effectively reduce the fifth-wheel height of the towing vehicle to ensure that the permitted external height is not exceeded, even when the internal load height is fully utilised. With a diameter of 934 mm, the steer axle tyre Conti EcoPlus HS3 355/50 R 22.5 offers a load-carrying capacity of eight tonnes. The drive-axle tyre Conti EcoPlus HD3 315/45 R 22.5, with a diameter of just 852 mm, has an axle load of 11.6 tonnes in twin fitment. Using the “0° technology” during the construction of the belt allows for high load capacity in the Conti EcoPlus HD3 315/45 R 22.5 and a special carcass cord supports the narrower drive axle tyre sidewalls. This highly stable but very flexible material enables the carcass to easily withstand localised high bending loads.

The newly developed tread design of the tyre improves grip in the wet; a result in part of the tightly interlocking micro-sipes between the longitudinal tread grooves. In addition, the “Plus Volume Pattern” of the Conti EcoPlus HS3 355/50 R 22.5 adds extra material to the tread, reducing the width of the longitudinal tread grooves. In turn the low void area of tread in contact with the road increases, simultaneously improving wear resistance.

Like all of Continental’s Generation 3 tyres, the Conti EcoPlus HS3 355/50 R 22.5 and the Conti EcoPlus HD3 315/45 R 22.5 use a retreadable premium carcass featuring the patented AirKeep® inner liner to prevent gradual loss of inflation pressure.
Regrooving and retreading give tyres a longer service life with a lower rolling resistance—directly impacting the cost-effectiveness of the fleet. Regrooving indicators are integrated into the tread of both tyres to mark the possible regrooving depth.