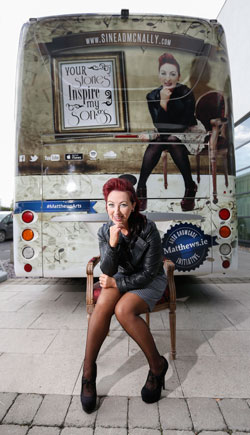 Artists will be left feeling ten feet tall on the back of coaches on the M1 motorway and beyond thanks to an innovative new business to arts competition launched this week.

The Matthews.ie Arts Showcase Initiative will promote and provide innovative advertising support on the rear of their vehicles to a succession of artists across a range of disciplines over a three-year period.

Singer songwriter Sinead McNally from Knockbridge, Co Louth, is the first recipient of the initiative, and her 3.6 metre advertisement will be seen on some of the company’s 133 daily services between Dublin and the north east from this morning.

Matthews.ie are going to pick an entry from across the arts disciplines in Louth, Monaghan and East Meath every six months to promote, with the winner receiving a full ad on the back of a Matthews coach for the duration to publicise themselves, or their art.

This practical Business to Arts initiative, which celebrates 20 years of Matthews Coach Hire, has been launched by Minister for Arts, Heritage and the Gaeltacht Heather Humphreys and the Minister for Business and Employment Gerald Nash.

As part of the initiative, Matthews.ie have also launched a CD single Matthews Take You There, the result of a unique collaboration between the company and Sinead McNally.  Matthews are recognised as being leaders in the coach transport industry in Ireland and carry 4,000 passengers a day as well as providing a range of day and extended tours.  “Every six months, a deserving person from the creative sector across the arts disciplines in Louth, Monaghan or East Meath will be selected as the showcase winner and have themselves or their works featured as an advertisement on the full back of a Matthews.ie coach,” said Matthews.ie Managing Director Paddy Matthews.

“We have always put the art and culture of the area to the fore in our numerous day and extended tours which promote the north east, and we see the benefits in promoting the artistic life of the region.”

Artists can enter themselves for consideration for this valuable prize by downloading the entry form from www.matthews.ie.

“It was clear early on in my partnership with Matthews.ie that the team really wanted to do something in the interest of the arts and I am very honoured to be part of that,” said Sinead.

“I know that over the coming years, artists across all the disciplines will benefit from the generosity and imaginative thinking that Matthews have offered them.”