Freightliner, owned by Daimler, has unveiled its Freightliner Inspiration Truck, the first licensed autonomous commercial vehicle to operate on open public highways in the United States.

The Inspiration Truck is a partially autonomous big rig that could save lives, mitigate driver fatigue and stress, and reduce CO2 emissions up to 5 per cent. 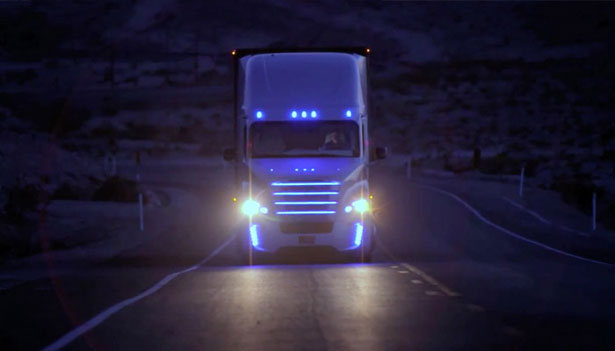 Daimler, which owns Freightliner, says it has done more than 10,000 miles of testing on the truck. And now it’s street-legal, having been officially granted one of Nevada’s”Autonomous Vehicle” license plates (the first for a commercial truck) by Nevada governor Brian Sandoval at a media event before the unveiling.

The Inspiration Truck and Daimler’s underlying “Highway Pilot” technology isn’t meant to replace truck drivers completely. Instead, it’s meant to solve the problem of fatigued driving, something that plagues truck drivers who have to pull long shifts. According to Daimler, 90 per cent of truck crashes result from driver error, and in one out of every eight of those cases driver fatigue plays a role.

Dr. Wolfgang Bernhard, Daimler AG’s truck boss, says that the Inspiration Truck mitigates that problem significantly. At a media event before the unveiling, he spoke about how taking control away from drivers positively impacts their ability to focus for long periods of time. “We measured brain activity with or without autonomous function, and it clearly shows that driver drowsiness decreases by about 25 percent when the truck is operating in autonomous mode,” he said.