Mercedes-Benz is gearing up to supply Castleblayney-based haulier Carna Transport with 20 new GigaSpace Actros units purchased by them to service their expanding domestic, UK and European networks services. 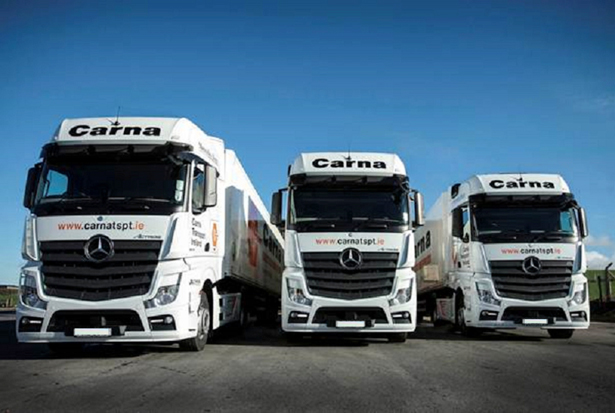 Chosen winner of the Export & Freight European Haulier of the Year 2014 award, Carna Transport is dedicated to providing what they term a ‘best in class’ service across its wide and growing customer base. Founded by Barry Hughes in 1973, Carna Transport has experienced significant growth over the intervening decades and today operates a fleet of 130 trucks on both National & Continental European routes.

Its decision to purchase Actros is said by Carna to have been largely influenced by ‘our positive experience of Mercedes-Benz and with Actros’. ‘Of importance to us is the trans-continental, on-the-road support that Mercedes-Benz provides for all hauliers plus the fuel consumption economies that we have been able to achieve with Actros’ a company spokesman said.