Ford was in quiet celebratory mood here last month as it marked the end of what had been referred to internally as ‘the Big Bang project”, writes Declan O’Byrne.
Stripping away the mystique, what Ford Ireland’s MD Eddie Murphy was referring to was the completion of the Ford Transit ‘family’ – a series of vans of various sizes and capabilities, first instigated in 2010 and designed to meet a wide variety of needs.
The stylish one-tonne Transit Custom lead the way. It was followed by the Transit Connect, and then the imposing two-tonne Transit. The final part of the jigsaw the smaller of the quartet, the stylish Ford Transit Courier will arrive here in the near future, with an entry level price of €13,990 ex-works (and including VAT) for the ‘Base’ version with the 1.5 litre Duratorq diesel.
As Murphy put it at the international launch, the company is “expecting quite good things from it”. Its appearance in the marketplace completes the successful roll-out of the fruit of the ’project’, which re-defines our commercial vehicle line-up, identifying the market space and going after it aggressively”.
The timing of the launch of the Courier, as Murphy acknowledged, could not have been more favourable as the current light commercial vehicle market in Ireland was showing signs of recovery with sales “in the first quarter up by between 40 and 50pc”. However he cautioned that figure was coming off a low base. However, he added, it was still a very decent year-on-year increase.
Another encouraging sign, Murphy pointed out, was the fact that car sales were also showing growth of some 28 per cent over the same period.
Van sales, he added, could be used to assess activity “in the wider economy”, while they were also an indicator that prospective customers were again being given access to finance. He added that there was also a significant level of “pent-up demand”, which had built up since the demise of the industry in 2008.
Murphy said that ” in terms of competition in the marketplace, it was very much a dogfight between Volkswagen and Ford. Ford had been around for some time and wasn’t going to go away,” he said.
Dismissing any danger of cannibalisation of Fiesta van and Focus van sales following the Courier’s introduction, Murphy said the Fiesta van was a more car-derived product and that the Courier would find its own niche.
Following the introduction of the all-new Transit, Transit Custom and Transit Connect models starting in late 2012, Ford’s share of commercial vehicle sales has grown to 10.4pc across Europe in the first three months of 2014. That represents the company’s highest for the period in 16 years.
In the year-to-date, Ford has sold about 50,000 commercial vehicles, an increase of 10 per cent over the same period last year.
Ford was rightly keen to point out that that the Courier offers small businesses and urban delivery services best-in-class fuel efficiency and load-carrying ability.
It will arrive here this summer with a 1.5-litre diesel engine for 3.9 l/100 km (or 72.4 mpg) while a 1.6-litre diesel engine for 3.7 l/100 km (or 76.3 mpg) and 97 g/km CO2 is also available to order.
Ford also claims that the van delivers 10 per cent more load volume than direct rivals, , with longer load length, better access width via sliding side doors and full steel bulkhead.
As a first drive in Germany, there’s no doubting that it’s a compact and versatile van and it benefits, too, from a new level of technology and functionality. It also offers impressive safety features, in-cab stowage space and connectivity, including Ford SYNC with Emergency Assistance. Fuel-saving Auto-Start-Stop is available as an option throughout the range.
All powertrains are offered with extended one-year/30,000 km service intervals and the vehicle design has been optimised, for ease of serviceability and repair.
A multi-piece rear bumper, rugged body-side protection and high-mounted front and rear lights are designed to help to reduce the cost of accident damage and to lead to lower insurance premiums. Fuelling errors should be avoided by the standard-fit Ford Easy Fuel system.
Ford boasts that the Transit Courier has a load compartment which offers superior load-carrying features compared to its direct rivals.
With a maximum payload capacity of 660 kgs, it can accommodate a wide variety of cargo and equipment, including a standard Euro pallet. For optimum access to the load compartment, twin asymmetric rear cargo doors with an opening angle of up to 158 degrees are standard. A choice of single or dual sliding side load doors can also be specified.
The comfortable cabin offers a mobile-office type environment, with a range of stowage features including a large centre console capable of storing A4 documents and small laptops; a full-width overhead stowage shelf; and a drawer under the front passenger seat.
Drivers can use the new ‘My Ford Dock’ to store, mount and charge their mobile devices such as phones and navigation systems while other smart and useful interior features include a rear view camera.
The new vehicle’s chassis has been tuned with a unique steering ratio and innovative dual-rate rear springs that help to deliver class-leading driving dynamics under all load conditions.
The springs enable the vehicle to offer a smooth and refined ride even when unladen, while maintaining the agile handling and the importuned maneuverability of a compact vehicle in busy urban streets.
In the world of small vans, the Courier is a particularly comfortable, well-equipped and, with those sliding doors, a versatile workhorse best suited to the demands of a tight city environment.
In short, I believe it will win over buyers and further bolster Ford’s current positive commercial sales figures, keeping the competition on their toes. 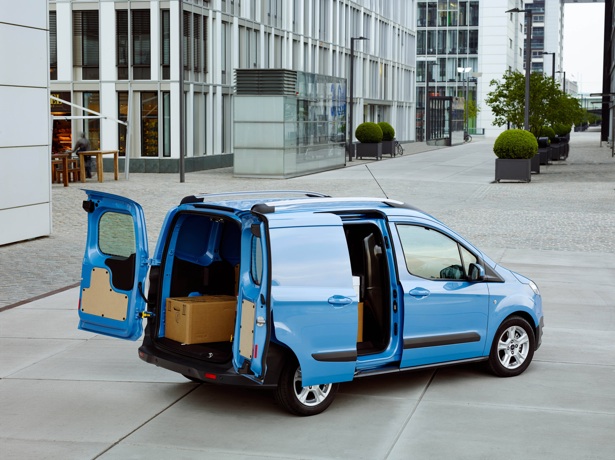