With the winter months upon us, cold, dark mornings spent scraping ice from the windscreen come to mind and a car that doesn’t start is the last thing anyone wants to worry about., writes Tim Howes, Deputy General Manager – Supply Chain & Technical Service, NGK Spark Plugs (UK) Ltd 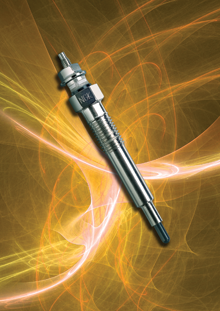 Now is the time for garages to take the initiative and ensure your customers’ vehicles are fully prepared for the inevitable cold snap. When carrying out a winter maintenance service there are some obvious areas worthy of attention such as coolant, hoses, belts and so on, but don’t be distracted from the fundamentals.

Low ambient temperatures place extra stress on all engine and ancillary components, especially at start up. Extra demand is placed on the electrical components, the starter motor possibly robbing some electrical energy usually available for the ignition system in SI engines and the preheating system in CI engines.

Spark and glow plug replacement should be part of the winter service as they play an integral role in a vehicle’s economy and emissions’ performance.

The performance and service life of many spark plug types has increased with the advances in technology. The use of multiple ground electrodes and precious metals, such as Iridium, has meant that certain plugs can be left in place for extended periods. This is, of course, dependent to some extent upon the use to which the vehicle is subjected and the condition of the engine.

Modern pump fuels have higher aromatic contents in order to raise the octane rating sufficiently. This means that there is more potential for carbon to be deposited on the insulator nose of a spark plug.

Cars used under frequent stop start conditions will be more prone to this carbon fouling; the plugs may not reach a sufficient temperature for a long enough period of time to burn off the carbon deposits.

The accumulation of dry carbon does not usually reduce the insulation resistance to the point at which misfiring will occur, the problem occurs when the carbon is wetted by poorly vapourised fuel.

The fuel soaked carbon rapidly reduces the insulation properties and left unchecked can allow some voltage to leak away to ground reducing the spark energy. In short this could mean the car will be difficult to start or not start at all.

There are two things to consider regarding this issue. Firstly, many spark plug types are specifically engineered for the intended application. This includes certain anti-cold fouling capabilities and the correct choice of heat range. If therefore the incorrect spark plug type is installed the possibility of poor starting performance is substantially increased. Secondly, are the plugs partially fouled with carbon?

It’s worth removing the plugs to actually check both of the above points. Some engines are obviously more difficult to work on than others, but it is still easier to check the plugs in the workshop than on the roadside when the vehicle has a problem. Ignition leads and coil contacts can also be checked at the same time. It goes without saying that partly worn or incorrectly gapped spark plugs will exacerbate any other ignition or fuelling deficiencies.

Methods of combating potential fouling include the use of semi surface discharge plugs, intermittent discharge plugs and supplementary gap plugs. These intelligent designs force the spark to discharge across to the ground electrodes or a chosen part of the metal shell.

The semi surface types discharge in this way at all times, the others only under fouling conditions. In order to avoid complaints about poor starting and misfiring under load it is more important than ever to select the correct spark plug type for the engine.

Historically the diesel engine has had a bad press when it comes to starting in cold weather. They still can fall victim to what can appear relatively small deficiencies in the electrical and fuelling systems.

Low battery voltage can affect the ability of cut off solenoids to operate correctly even if they have enough energy to crank the engine. Similarly a low battery voltage can mean that the voltage available to operate the glow plugs is not sufficient to allow the probes to get to their optimum temperature. The pre heat time is so short now that a good electrical supply and ground is essential.

Many modern high-speed diesel engines rely on high performance glow plugs not only to aid starting, but also to improve the general drivability during the first few minutes after start up. The glow plugs often go through three stages of heating, pre-heating (prior to cranking), start heating (during cranking) and post-heating (after the engine has fired). The post heating types are common now and often are engineered with their own self-regulating devices inside.

Some engine manufacturers favour the use of ceramic glow plugs. These have extremely fast heating times, typically two seconds to reach 1000°C with final temperatures exceeding 1350°C. They also have very good durability qualities and can operate for up to twice as many times as conventional metal types.

Cars that have little or no difficulty starting in mild weather can suddenly become reluctant to fire up when the ambient temperature drops significantly. Assuming you have made the obvious checks, battery and fuel delivery, a look at the glow plugs is probably the next step. Through the summer months it is quite possible that the car has been starting up on, for example three out of four glow plugs. In cold conditions the deficiency in the fourth combustion chamber becomes too great.
The best approach is not to make assumptions but, as with all diagnostic work, adopt a logical procedure for checking the system. Are you getting sufficient voltage to the glow plugs? Does it occur for long enough or is the controller shutting off or reducing the voltage too soon?

A quick check on the glow plugs would be to carry out a resistance check. This would identify either a broken heating or regulating coil or poor ground connection. One thing to remember though is that it will not tell you if it is the correct type of glow plug fitted.

The range of glow plugs available for automotive applications is very wide. There are many obvious differences between them such as thread sizes, terminal connections and probe lengths, but much more must be considered. On a direct injection engine it is not uncommon for the heater probe to project only a few mm. into the combustion chamber, therefore probe length is critical.

Many technicians will ensure that the voltage is compatible but something that is not always considered is the current draw. Depending on the design, current draw characteristics can vary from an initial inrush value in excess of 80 amps to a stable current around 6 amps.

Some manufacturers however – NGK for example – can produce glow plugs with lower current draw whilst maintaining the required heating characteristics.

Taking an accurate measurement of current draw is not too difficult especially with the use of inductive current clamps. Individual or total consumption can be measured, but when taking a total consumption reading it is then more difficult to decide if the readings are acceptable.

As I have already mentioned the current can be anything but stable especially in the first few seconds. Some glow control systems are designed to operate at a constant current. This will, however, vary according to for example the engine temperature and the battery condition at the time of test.

There are some quick glow systems that have a very high inrush current; this drops off after a few seconds and then cycles very rapidly typically drawing between 18 and zero amps. The operation of the control relay in this type of system is critical.

Even later self-regulating, post glow types can be difficult to test. Because of the strategy employed in the pre-heating cycle the stable current can often not be measured until at least 30 seconds after the application of voltage.

Manufacturers usually mark glow plugs with a voltage, but care must be taken as this is often a ‘rated voltage’ or test voltage for taking current and temperature data. It could be found that a glow plug marked 10.5 V is actually designed to operate at 6.0 V for most of its cycle when in the vehicle.

Again regarding the supply voltage, under cranking the glow plug may be supplied at 9.0 V and once the engine has started the charging system will bring the battery voltage (and the glow plug supply) up to over 14.0 V. A typical stable current at the rated voltage might be 6.0 A, but many modern vehicle systems operate so quickly that ‘in the vehicle’ testing could prove impossible as the voltage is cut before this stable condition is reached.
Once removed the glow plug can provide the vital information regarding engine condition. Damaged heater probes can be attributed to several different faulty components. Poor spray patterns from injectors can cause local hot spots that partially melt the heater tube.

Worn guides, rings or turbo charger can lead to excessive oil reaching the combustion chamber; this can have a similar effect on the heater probe due to overheating caused by abnormal combustion.

A bulging or swollen heater tube can be an indication that excessive voltage has been applied. Stop to think about the excessive voltage! Is it the correct glow plug? Is the controller applying the voltage on too long? Don’t overlook something as simple as to make sure that the alternator is not overcharging!

Another simple check is to ensure that the terminal nut has not been over-tightened. Sometimes this can cause the lead, busbar or even the insulated centre electrode to be grounded, resulting in a direct short and no heating effect.

Indeed when installing the new plugs ensure that the threads in the cylinder head are clean and in good condition do not be tempted to apply any anti seize compounds. This can easily result in over torque and distortion of the metal shell. Breakage is then more likely especially upon subsequent removal.

The glow plug also relies on a good contact with the material of the cylinder head to dissipate some of the heat generated. Greases can restrict this heat flow and again shorten the life of the plug.

Use of all the available information and quality replacement parts should keep your customers on the road between services.